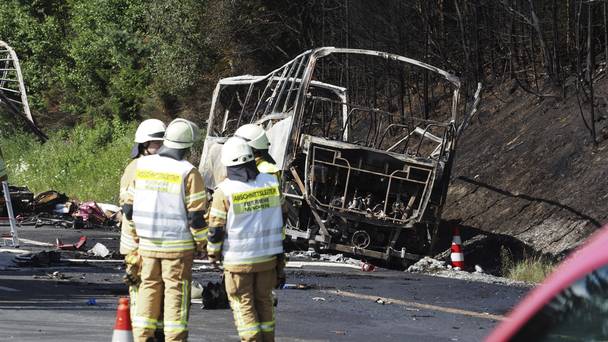 A tourist coach taking pensioners to Italy burst into flames and burnt out after hitting a lorry in a slow moving traffic near Stammbach, Bavaria, Germany, 3rd July. 18 people were killed and a further 30 injured. The cause of the fire is not yet identified. The lorry trailer is said to have been carrying mattresses and pillows.

Fire fighters arrived on the scene within ten minutes but the fire was by then already too intense to approach. The lorry driver, who survived, is reported as indicating that no one was injured in the crash but that the vehicles caught fire almost immediately. In another recent incident, 9th May, 11 children aged 3-7 died in a bus fire in the Taojiakuang Tunnel, Weihai, Shandong, Eastern China. The children, mostly South Koreans, were pupils at the Zhongshi International School. Authorities say the driver set the bus on fire after hitting another vehicle. In another incident in South Carolina, more than 50 students escaped without injury when their school bus caught fire whilst driving. Coach fire safety standards worldwide are very lax compared to railways or aviation (see pinfa Newsletter n°67) so that fire can spread rapidly through flammable materials inside the bus, an exception being US school buses where standards are somewhat higher (pinfa Newsletter n°13).