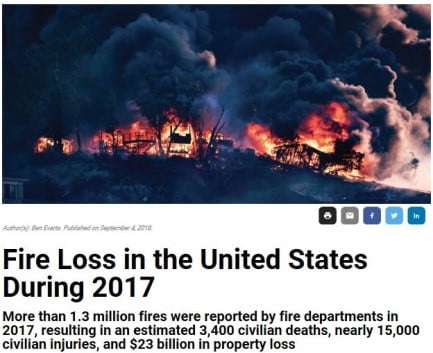 The US NFPA (National Fire Protection Association) report on fire losses for 2017 shows that despite a continuing slow decrease in the number of fires (-2% from 2016) the number of civilian deaths at 3 400 /year increased slightly. Fires in the USA also caused nearly 15 000 civilian injuries (also increasing slightly from 2016) and US$23 billion property loss in 2017. The fire property loss is more than twice that for 2016, largely because of wildfires, but non-wildfire structure fire property losses also increased by 35%. Nearly 80% of civilian fire deaths were in homes. Over the last 40 years, the number of home fire deaths fell from over 5 800 to around 2 600, but the death rate per fire has not significantly changed (7.4 deaths per 1 000 home fires in 2017). The report is based on a survey of nearly 2 600 fire departments across the USA and includes only fires attended by public fire services (property damage of non-attended fires is not included).

NFPA report “Fire Loss in the United States During 2017”, B. Evarts https://www.nfpa.org/News-and-Research/Publications/NFPA-Journal/2018/September-October-2018/Features/2017-US-Fire-Loss-Report and https://www.nfpa.org/News-and-Research/Fire-statistics-and-reports/Fire-statistics/Fires-in-the-US/Overall-fire-problem/Fire-loss-in-the-United-States