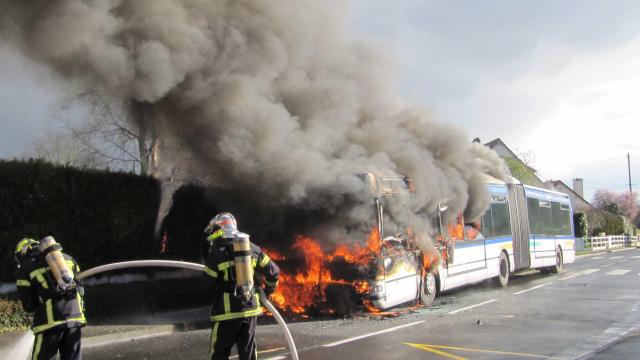 The French Environment Ministry’s transport accident investigation Bureau (BEA-TT) has published the official report into the accident and coach fire in which 41 died at Puisseguin, 23rd October 2015.

The main cause of the fire is identified as an unauthorised additional diesel fuel tank added behind the cabin of the lorry involved in the initial accident. The Bureau notes that “a violent fire started immediately after the collision. The coach was very rapidly filled with black toxic smoke and attacked by flames”. The Bureau makes five recommendations: the first concerns verification of additional fuel tanks, the second asks for tightening of fire performance of materials used in vehicles, and the three others concern smoke ventilation, exit and emergency lighting systems. The Bureau notes that the non-structural bodywork of the coach, seats, carpets, flooring and curtains were made of a range of inflammable materials including polymers, wood, textiles and foams; and that some of these are “very well combustible … and release strongly toxic gases”. The Bureau specifically recommends that “in the context of revision of the EEC-UNO regulation n°118, to propose to reinforce requirements concerning fire resistance of materials used in vehicle construction, and to introduce new requirements addressing the toxicity released by combustion of these materials”. The Bureau notes that it already recommended tightening the fire performance of materials used in coaches following the 23rd February 2008 coach fire (A43, Marches en Savoie: recommendation to consider vertical rather than horizontal combustion where relevant) and the 31st July 1982 coach fire (Beaune, recommendation to apply ISO 37 95 or stricter to interior and seat materials). The legal representative of the majority of the accident victims, Maître Mescam, commented that “the fire safety standards in the coach were extremely low … around one bus a month burns in France … bus fire standards should be the same as in aviation, trains and shipping”.