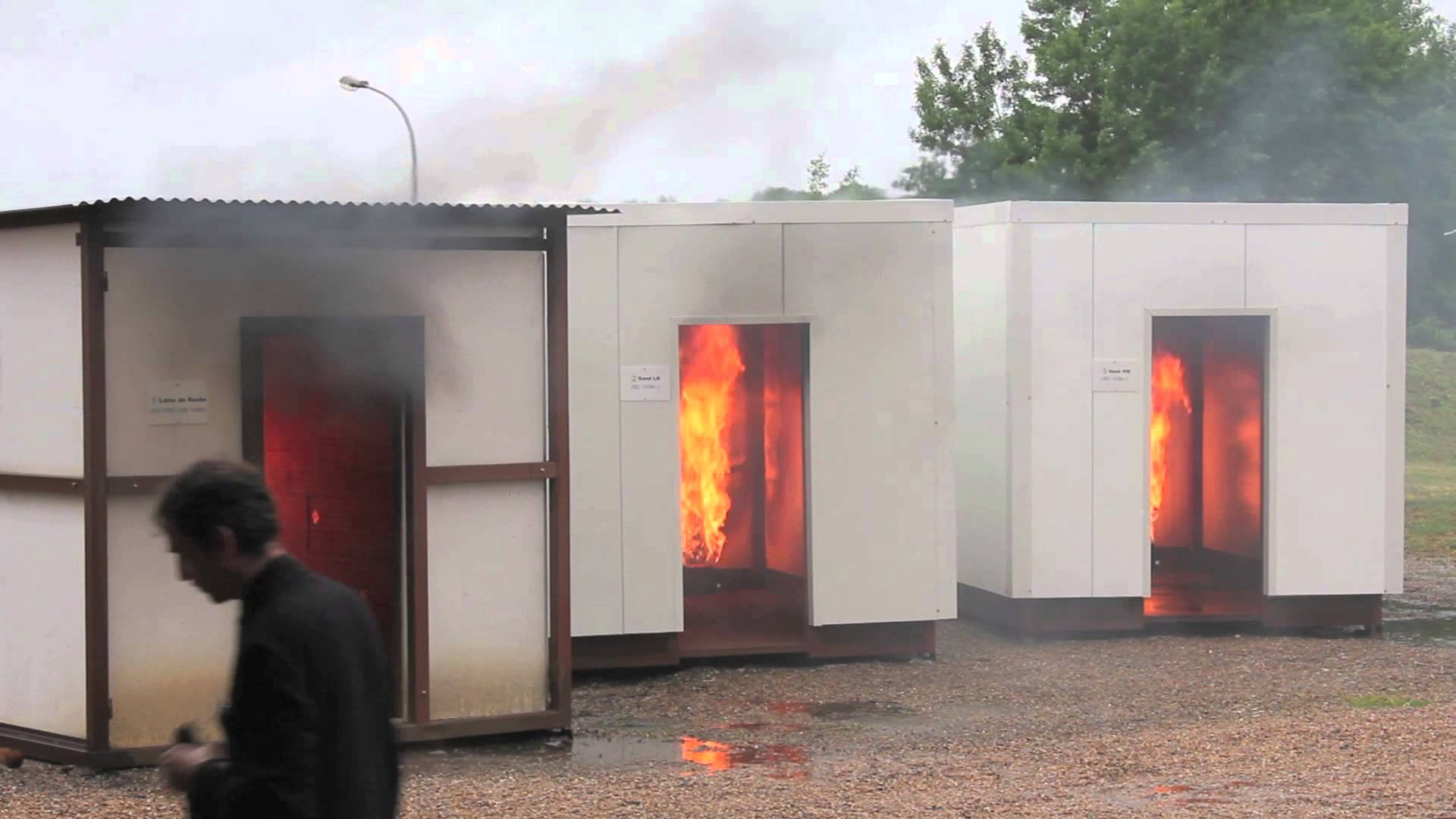 The room contained a bed (pine), mattress and bedding, furnishing and daily items (wardrobe, desk, table – all wood/fibreboard, rug, clothes, towels, books, CD cases, papers, food packets) and fittings (flooring, electrical ducting). The room was 3m x 3m x 2.5m high, with non -flammable walls and ceiling, and PVC flooring and fittings. Temperatures were measured at heights from 0.8m to ceiling and toxic gases (by FTIR) at height 0.6m to ceiling. The room was fitted with a smoke alarm on the ceiling. In the first three tests, different fire sources were placed on the bedding and the room door remained closed, simulating a fire starting whilst a person is asleep in bed (under ventilated fire). In the last two tests, fires of different sizes were started in waste paper baskets under the desk and the door of the room was opened, simulating a person escaping rapidly.
The paper also summarises previous fire tenability studies carried out on full-scale room set-ups (Grand et al. 1985, South West Research Inst.), Morikawa et al. (1987, 1993), Purser 2000, Gann et al. 2003, single furniture items (Sündstrom 1987) or tenability modelling (Peacock et al. 2004), underlining the lack of data from full-scale tests relevant to assessing capacity of occupants to escape and risk of toxicity injuries.

In the first two tests, a smoldering cigarette and a match were placed on the bedding (on the quilt, cotton-polyester fabric, polyester lining). In both cases, the quilt did not catch fire and did not significantly smolder. It should be noted that domestic bedding in France is subject to legal fire safety regulations requiring resistance to ignition by a burning cigarette (Décret 2000-164 du 14/2/2000). In the third test (under ventilated, door closed), a small fire (small crib, BS6807 #5, equivalent to a burning ball of paper) is placed on the bedding. No flames are observed for 10 minutes, but carbon monoxide levels start to rise significantly from 2 minutes, at which time the smoke alarm activates in the room. The smoke reaches a density such that escape would be compromised for an unknown travel path after c. 3 minutes Concentrations of oxygen fall to levels which would compromise tenability (occupant survival) after c. 4 minutes and carbon monoxide and hydrogen cyanide reach levels which would compromise tenability after c. 6 minutes.

In the last two tests, small fires were lit in waste paper bins under the desk. In one test, the fire was lit in a metal bin containing 500 g of crumpled paper (in this test, the fire burned out in the wastepaper without spreading to the desk). In the second test, the fire was lit in one such bin with a second bin also containing 500g of crumpled paper next to it (the fire spread to the second bin). In this second test the fire alarm activates at 3 minutes 15 seconds, gas toxicity does not reach untenable levels until around 6 minutes and smoke density does not compromise escape (for unknown route) until 5 minutes whereas temperatures threaten survival from c. 4 minutes.

The authors conclude that in these full-scale tests smoke alarms in the room where the fire is situated activate in time to make escape possible for a healthy individual. However, in both cases an individual with inhibited movement (invalid, old or young children) would be at significant risk as there are only 1 – 2 minutes between smoke alarm activation and both smoke density levels impeding escape and conditions becoming untenable for occupant survival (because of toxic gases in the under ventilated room – door closed, because of temperature in the ventilated room – door open). The authors note that results are highly specific to fire conditions, materials involved in the fire, and risk to occupants are highly dependent on their reaction and mobility in the face of the fire event. In all cases, occupants would be at high risk of death if smoke alarms were not operational or in case of late detection of the fire.