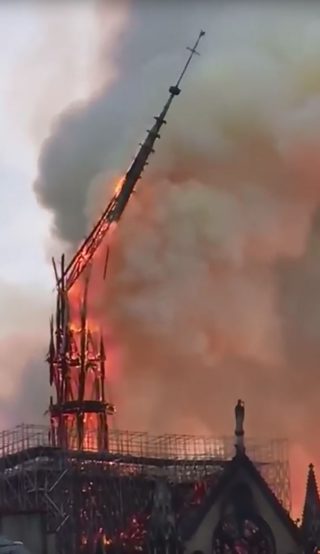 On 15th April, The fire which partly destroyed the Notre Dame Cathedral, Paris, a symbol of the French nation, was watched live by the nation at peak television news time. The cause of the fire remains under investigation, but it started in the complex “forest” of roof rafters where renovation work was underway. The bravery, competence and appropriate response of fire fighters prevented complete collapse of the building, maybe by only a few minutes. Guillermo Rein, Imperial College London, on BBC Science, 18th April, 21h00, explained that the mixture of thin and thick wood made the worst scenario for fire, combining easy to ignite with long-burning and hard to extinguish. He indicates that the only fire protection in place (“one layer”) was to avoid introducing an ignition source. He noted that cold water on hot stone can cause collapse, so making the firefighters intervention very complex. Fire can irreversibly damage stone, steel, brick and concrete, and knowledge is very lacking in these areas. France has announced an international architectural competition to replace the Cathedral’s spire, which the world saw fall into the fire, either identical or with a modern new design. The destroyed spire was built in 1880 (on an 1852 design) by Violet Le Duc, France’s “notorious” gothic heritage restorer.