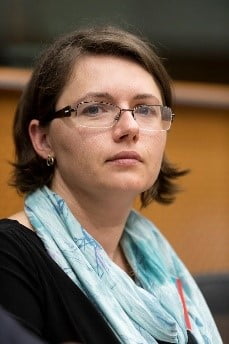 Anna Stec, UCLAN (University of Central Lancashire), UK, gave her vision of smoke toxicity from fires involving today’s synthetic materials (see summaries of her recent papers in pinfa Newsletters n° 85 and 87). She noted that accidental fires disperse toxicants by three pathways: gaseous molecules, condensing of gas phase pollutants onto soot, and toxicity in residual ash. Smoke toxicity depends on fire development (well ventilated or oxygen deprived conditions), presence of heteroatoms, such as Cl, Br, N, S, Sb in burning materials, and emission of organic toxicants from incomplete combustion. She said that the importance of hydrogen cyanide (HCN) in fire fatalities is often underestimated: HCN is 35x more lethal than carbon monoxide (CO) and rapidly causes unconsciousness. However, HCN is less stable in bodies than CO (so is not identified post-mortem), whereas exposure to CO is measurable after death (as carboxyhaemoglobin).

For these reasons, she considers that smoke toxicity regulation should be introduced in Europe for construction products. She notes that in the recent EU study on this question (for the Construction Products Regulation CPR, see pinfa Newsletter n°89) five countries replied to EU questions stating that they already have existing regulations on the toxicity of smoke from construction products (Belgium, France, Lithuania, Poland and Sweden). This report recognised the need to address the issues associated with fire toxicity of smoke produced by building contents when toxic smoke is leaking into or being generated in areas that are considered to be escape routes or safe zones.

pinfa editor’s comment: to our understanding, of the five countries stating to have construction products smoke toxicity regulation, the information in the report suggests that two regulate smoke toxicity (Lithuania = ISO13387, Poland = PNB-02855) and the other three limit smoke emission or corrosivity. The report also notes that London Underground Fire safety performance requirements 1-085 refer to the toxic fume test B2 in Annex B of BS 6853.