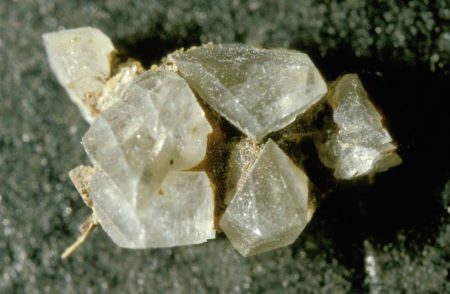 Struvite (magnesium ammonium phosphate) is today recovered from municipal wastewater, food industry waste streams and other wastes. It enables phosphorus recycling as a fertiliser, but has also been tested as a PIN flame retardant for cotton and wood by Yetilmezsoy et al. 2018 (simply placing powdered struvite in or on the material). In a second paper, Guo et al. generated struvite in situ within wood (0.8 mm Norway spruce veneer), by vacuum impregnation of the wood with magnesium sulphate and potassium phosphate aqueous solutions (3 x 1 hour), wiping clean, then fumigation by ammonia for 10 hours, then leaching to remove remaining soluble salts. This resulted in just over 20% (by volume) loading of struvite in the wood. The struvite mineralised wood veneer could not be ignited by a small flame (untreated veneer ignited in two seconds) and showed an LOI (Limited Oxygen Index) nearly tripled. The authors suggest that struvite acts as a FR by absorbing energy in decomposition in heat, releasing non flammable gases and water, and by releasing amorphous magnesium phosphate (MgHPO4) which promotes char formation.