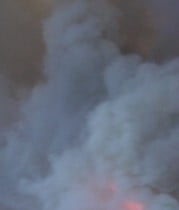 Thirteen different combinations of thermoplastic polyurethane (TPU) with and without PIN flame retardants were tested for emission of toxic gases during thermal degradation / combustion in nitrogen and in air (TG-FTIR, static tube furnace and steady-state tube furnace). The PIN flame retardants tested were ammonium polyphosphate (APP), aluminium hydroxide (ATH) and nano-montmorillonite (MMT) in varying combinations and loadings up to 12% total. Smoke toxicity estimated by FED (fractional effective dose) was calculated based on concentrations of CO, CO2 and HCN. Over 50% of toxicity was due to HCN. Smoke toxicity, as calculated by this method, was reduced in TPU containing APP-ATH and APP-ATH-MMT.