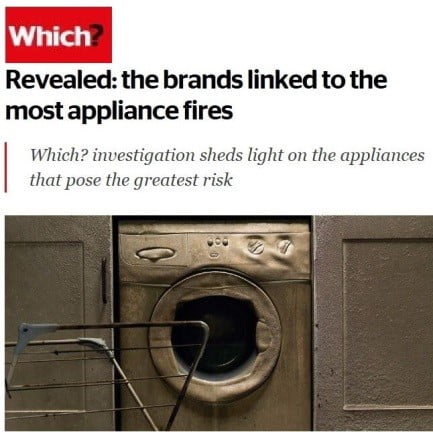 The UK’s leading consumer magazine has launched an “End Dangerous Products” campaign, calling for reforms of the UK’s product safety regulations and for manufacturers to “Stop making cold appliances with non-flame-retardant plastic backs”. The London Fire Brigade has already been campaigning for some time to make fire-resistant backings obligatory. The WHICH campaign, which has achieved considerable media coverage, reminds that the tragic Grenfell Tower fire was started by a fridge-freezer.

By requesting official data, WHICH shows that over 3 000 UK household fires per year are caused by faulty electrical appliances and leads, of which 1/3 by washing machines and tumble driers. WHICH names several brands linked to a significant proportion of fires, and advises consumers to “stop buying fridges and freezers with flammable plastic backs”. BEKO is quoted as stating “Since 2007, our entire refrigeration range has been fitted with flame retardant backs. We have not seen a single fire in a Beko cooling product manufactured following this, where the refrigerator has been proved to be the cause”.