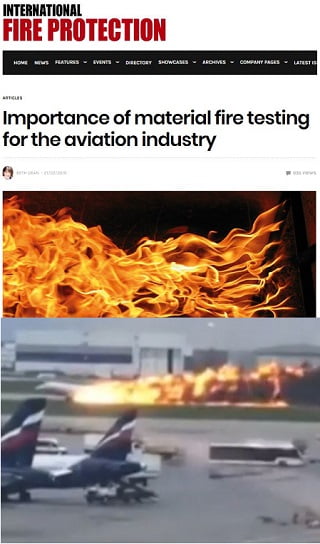 Beth Dean, in IFP Magazine, summarises the history of aviation fire safety, key fire tests used today and perspectives for the future. Materials fire testing in aviation was introduced from the 1940’s but was limited to vertical flame spread. Requirements were considerably tightened from the 1980’s, after an inflight fire in 1983 (Canada, DC-9) in which half of the 46 passengers died. Today’s aircraft materials fire tests include Bunsen burner self-extinguishing and flaming droplets requirements, 60 minute test for cables, kerosene test for some larger aircraft parts, heat release rate and smoke development. There have been 3 000 fires in aviation over the last ten years, with only 10 fatalities. However, the author expects the ongoing increase in air travel and development of new generation aircraft will lead to pressure to continue to tighten fire safety requirements. Requirements may also be extended to smaller aircraft (<20 seats currently excluded). Smoke toxicity testing is today required by leading aircraft manufacturers, and harmonisation of toxicity testing requirements can be expected.
The dangers of fire in aircraft have been sadly shown by the Aeroflot plane fire at Moscow airport on 4th May this year, in which over 40 people died, apparently after the plane engines and fuel caught fire during an emergency landing.