WHAT ARE PIN FRs

This short video is aimed at providing some answers about why flame retardants are used and useful and how they work.

Pinfa focuses on flame retardants based on the elements phosphorus and nitrogen as well as inorganic materials. Their basic chemical structures, properties and applications are presented below. While some halogenated phosphorus compounds are used as flame retardants, these are not within the scope of Pinfa.

They have a broad range of applications, and a good fire safety performance. The most important phosphorus-containing flame retardants are phosphate esters, phosphonates and phosphinates.

Flame retardant grades based on red phosphorus are mainly used in glass fibre reinforced polyamide 6 and 66. Further applications are in polyethylene and ethylene vinyl acetate (EVA), polyurethane foam, and thermosettings resins (unsaturated polyesters and epoxies). Ammonium polyphosphate grades are primarily used in intumescent coatings. They are also found in rigid and flexible polyurethane foams and polyolefins (injection moulded), in formulations for unsaturated polyesters, phenolics, epoxies and coatings for textiles. 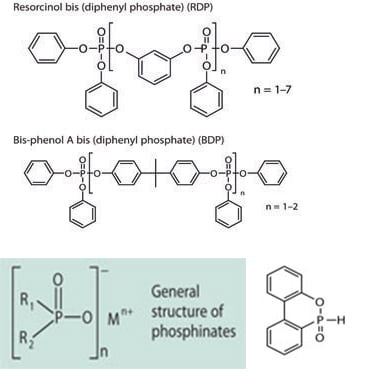 The most common inorganic flame retardants are the hydroxides or aluminium and magnesium. Aluminium trihydroxide (ATH) is by far the most widely used flame retardant on a tonnage basis. It is inexpensive, but usually requires higher loadings in polymers of up to more than 60% because the flame retardant mechanism is based on the release of water which cools and dilutes the flame zone. Magnesium hydroxide (MDH) is used in polymers which have higher processing temperatures, because it is stable up to temperatures of around 300 °C versus ATH which decomposes around 200 °C.

Fine precipitated ATH and MDH (grain size < 2 μm) are used in melt compounding and extrusion of thermoplastics like cable PVC or polyolefins for cables. For use in cable, ATH and more often MDH are coated with organic materials to improve their compatibility with the polymer. Coarser ground and air separated grades can be used in liquid resin compounding of thermosets for electrical applications, seats, panels and vehicle parts.

A number of other inorganic substances show flame retarding effects and are used in commercial applications. Most of them are used as synergists i.e. they enhance the performance of other flame retardants or they are used for specific effects like the suppression of smoke formation. For example, borates are used as mixtures of boric acids and borax as flame retardants for cellulose (cotton) and of zinc borate for PVC and other plastics like polyolefins, elastomers, polyamides, or epoxy resins. In halogen-containing systems, zinc borate is used in conjunction with antimony oxide, while in halogen-free systems it is normally used in conjunction with aluminium trihydroxide, magnesium hydroxide, or red phosphorus. In some particular applications zinc borate can be used alone. Boron containing compounds act by stepwise release of water and formation of a glassy coating which protects the surface.

Zinc compounds were initially developed as smoke suppressants for PVC (Zinc hydroxystannate). Later it was found that they also act as flame retardants in certain plastics mainly by promoting char formation.

Intumescent flame retardant systems expand to produce foams. They are used as coatings not only to protect combustible materials such as wood and plastics, but also steel structures in buildings, because steel loses its strength when exposed to high temperatures in a fire. The intumescent effect is achieved by combining an acid source like ammonium polyphosphate, a source of carbon, compounds which release non-combustible gases for blowing the foam on thermal decomposition and resin binders to stabilise the foam. 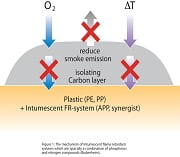 Expandable graphite is manufactured from flake graphite by treatment with strong acids like sulphuric or nitric acid. The acid is trapped in the crystal layers of the graphite (“intercalated”). When it is heated, the graphite starts to expand up to several hundred cm3 per gram, forming a protective layer for the polymer. Expandable graphite is used in plastics, rubbers (elastomers), coatings, textiles and especially in polymeric foams. To achieve an optimum flame retarding effect, the use of synergists like ammonium polyphosphate or zinc borate is often necessary. The black colour of graphite limits its applicability in some cases.

Nanocomposites have been gaining increasing attention since the late 1990s as potential new flame retardants. Nanocomposites are polymer-layered silicates based on aluminosilicate clay minerals like montmorillonite, composed of layers with gaps (gallery spaces) in between. These silicates have the ability to incorporate polymers. Research with nanocomposites has focused on plastics like polymethyl-methacrylate (PMMA), polypropylene, polystyrene, and polyamides. Nanocomposites particularly prevent dripping and promote char formation. Therefore, they have been used as synergists in some polymer / flame retardant combinations. However, they require special processing and for the time being are not considered to become viable stand-alone flame retardants.

Other inorganic fillers like talcum or chalk (calcium carbonate) are sometimes denoted as flame retardants, but they do not specifically interact with the ignition process. On the contrary, simply by diluting the combustible polymer they reduce its flammability and fire load.

Nitrogen based flame retardants are believed to act by several mechanisms ( i.e. salts with organic or inorganic acids such as boric acid or cyanuric acid)

Three chemical groups can be distinguished: pure melamine, melamine derivatives, i.e. salts with organic or inorganic acids such as boric acid, cyanuric acid, phosphoric acid or pyro/poly-phosphoric acid, and melamine homologues such as melam, melem and melon, the latter finding only experimental use at this stage.

Nitrogen flame retardants are believed to act by several mechanisms: In the condensed phase, melamine is transformed into cross-linked structures which promote char formation. Ammonia is released in these reactions. In conjunction with phosphorus, the nitrogen appears to enhance the attachment of the phosphorus to the polymer. A mechanism in the gas phase may be the release of molecular nitrogen which dilutes the volatile polymer decomposition products.

Melamine is mainly used in polyurethane foams, whereas melamine cyanurate is used in nylons or in polypropylene intumescent formulations in conjunction with ammonium polyphosphate. The phosphate, poly- and pyrophosphates of melamine contain both nitrogen and phosphorus and are used in nylons. In some specific formulations, triazines, isocyanurates, urea, guanidine and cyanuric acid derivatives are used as reactive compounds. 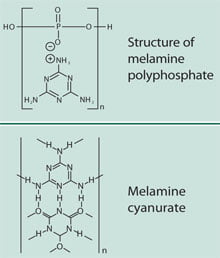