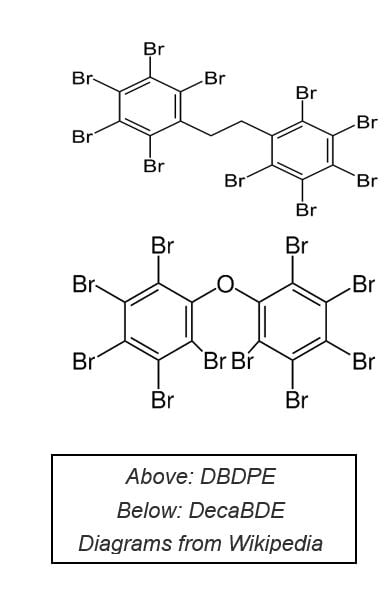 To 28th July 2022: proposed bans of decabromodiphenyl ethane (DBDPE) and Dechlorane Plus (DP), as well as on extension of existing bans on brominated FRs HBCD and PBDEs.
Note: decabromodiphenyl ethane (DBDPE, ENIECS 262-680-7) is a different chemical from DecaBDE, which is a PBDE (polybrominated diphenylethers), and is already banned in Canada (see below), but its chemical structure is similar (see images left from Wikipedia).
The risk assessments of DBDPE and DP concluded that they are persistent and widespread in Canada’s environment, and that DBDPE, DP and breakdown products of PBDBE are potentially toxic. The proposal will add these two halogenated flame retardants to the Canada CEPA Schedule 1 list of Toxic Substances. The proposal would (after six months) prohibit the manufacture, use, sale and import of DBDPE and of Dechlorane Plus in Canada. For a three-year transitional period, exemptions could be authorised by permit in cases where no technically or economically feasible alternatives are available. Exemptions proposed are imports of compounds containing DBDPE for wire and cable manufacture for 5 years, vehicle and specific parts for 5 years, replacement parts for 20 years.
Dechlorane Plus is already under consideration by the Stockholm Convention for possible designation as a “POP”, which would lead to a global ban, whereas this proposed regulation would be the first national ban on PBDBE worldwide.
For PBDEs, the proposals would reduce exemptions in the existing ban, to result in a complete ban except for vehicle parts to 2036 and certain existing or in-transit pellets (simplified). For HBCD, the changes would extend the existing ban on the substance HBCD and on extruded polystyrene containing HBCD, to result in a ban all articles containing HBCD, with limited exemptions for vehicle parts to 2035 and for existing articles.