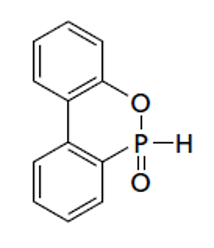 Two phosphorus compounds (DOPO, BICP) combine to cure epoxy, resulting in fire resistance and reduced smoke. DOPO (9,10-dihydro-9-oxa-10-phosphaphenanthrene-10-oxide) and BICP (cyclotriphosphazene-modified benzimidazole) together showed to act as a curing agent for DGEBA, reacting into the epoxy resin. At a loading of 10% DOPO and 16.5% BICP (total P content in final resin: 2.6%), LOI was increased by nearly 70%, peak heat release was reduced by nearly 75% and total smoke production by over 50%. This flame retardant mechanism is considered to be a combination of phosphorus radicals active in the gas phase and generation of a highly intumescent, highly graphitised char layer.