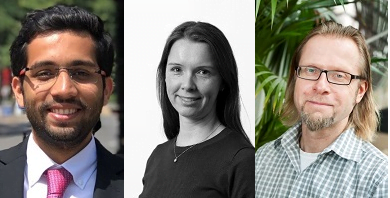 Margaret Macnamee, Lund University, presented the Fire Impact Tool (developed from the ENVECO tool), to provide decision support and training information to firefighters on LCA (Life Cycle Analysis) and ERA (local Environmental Risk Assessment) related to different fire interventions. The tool indicates risk of emissions to air, surface and ground water and to soil, depending on the products engaged in the fire or at risk and of possible fire service intervention strategies.

Adhiraj Shinde, North Carolina State University, presented results on off-gassing of toxic contaminants in used firefighters’ gear (protective clothing) using a technique known as Headspace sampling-GC-MS. The main toxins found, phenols and phthalates were at higher levels in the new gear, presumably because they are present in synthetic materials that are being increasingly used in recent years. Perfluoro alcohols were found at higher levels in the older gear possibly because some of these chemicals were recently banned. High boiling compounds such as PAHs were not found, which could be a limitation of the method. An interesting observation was that all the three layers of the turnout gear (outer shell, moisture barrier and thermal liner) off-gassed a wide range of contaminants. It was an observation worth noting that there was a substantial increase in the amount of chemicals released from the gear at elevated temperatures. Headspace sampling proves to be an effective screening method for the release of chemicals from a solid or liquid sample, when it is heated.

Karolina Storesund, RISE Fire Research Norway, presented development of a testing method to assess risk of PAH and particle penetration to firefighters, with simulated work in a smoke chamber. Some soot and PAHs were shown to reach the body despite protective clothing. The study aimed to develop a methodology, not to quantify exposure.

Per Blomqvist, RISE Sweden, investigated different bench scale testing methods for their applicability regarding smoke toxicity from combustion. 12 different materials (11 different insulation materials and one thermoplastic, PMMA) were tested under various test conditions. He underlined that a valid bench scale test should replicate real fire condition, and that an under-ventilated fire is the type of fire producing the most toxic smoke gases. Only the ISO/TS 19700 steady state tube furnace generally enabled prolonged steady flaming combustion conditions at under-ventilated conditions. For the controlled atmosphere cone calorimeter (ISO 5660-1 with ventilation control box) it was difficult to predict the influence of vitiation and there were limitations in reaching under-ventilated conditions. The smoke chamber (ISO 5659-2) tests often resulted in non-flaming conditions and in cases of flaming combustion there was limited global oxygen consumption pointing at overall well-ventilated conditions.