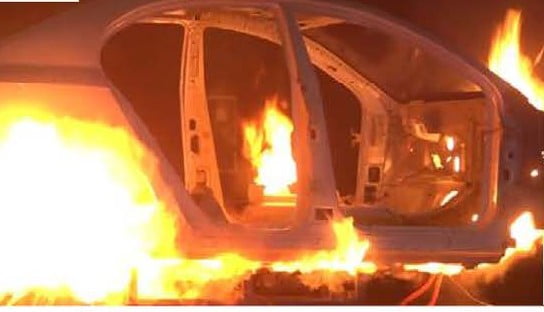 In just 22 seconds, cell thermal runaway spreads flames throughout the battery compartment. A full-scale fire test was carried out on a battery system of seventeen 3P6S battery modules mounted with control systems in a car chassis. One battery module was overcharged until thermal runaway occurred. Within five seconds, thermal runaway spread to the four adjacent modules. Released gas was immediately ignited, with jet flame and smoke, and temperatures reached over 600°C. These five modules then smouldered, and further modules ignited after around two minutes. The authors note that water fire suppression would be hindered by the battery pack casings.