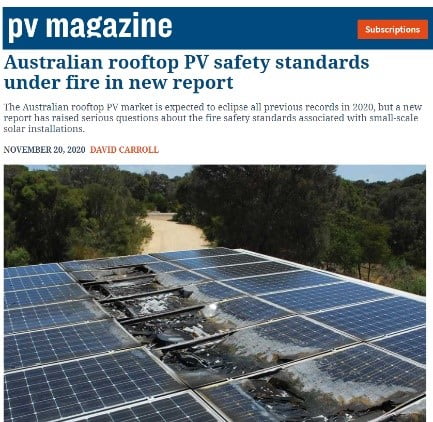 PV-Magazine raises concerns about fire safety standards for domestic and small scale solar panel PV systems. PV-Magazine (20th November 2020) underlines that safety requirements vary between countries and suggests that Australia’s standard is problematic, because it makes “DC isolators” obligatory. A report by BRE for the UK Government (2018) suggested that 30% of PV fires started in a DC isolator. These are used to prevent high-voltages being present in wires to the inverter after the installation is switched off, but can be replaced by other rapid shutdown mechanisms. PV fires are rare (< 1 incident per 10 000 installations) but the BRE report concluded that around one quarter of PV fires are serious and spread beyond the PV system. The BRE report also noted that a third of fires were related to poor installation. Walmart had seven rooftop solar fires (2012-2018) in systems installed by Tesla in 2017.