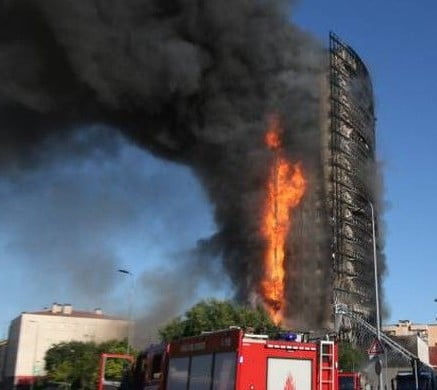 Combustible ACM cladding is again accused of causing fire spread over the 18-floor building, leaving 70 families homeless. The modernistic residential tower block was completed in 2011. A fire started on a Sunday afternoon in a flat on the 15th floor, possibly due to an electrical fault in an aircon unit. Videos show fire spreading through the ACM (aluminium composite material) cladding, engulfing the whole building in minutes. Reports suggest that fire spread may have been accentuated by the “sail” design of the building cladding, which left open space behind and that the cladding melted causing pools at the foot of the building. There were no casualties, probably because many residents were not at home on a Sunday afternoon and because the fire services gave priority to evacuating the building before attempting to fight the fire (unlike Grenfell where the initial strategy was “stay in your flat”). Investigations are ongoing as to the initial cause of the fire and to why it spread so rapidly through the cladding, but the Italian Interior Ministry has already stated that ““the rapid spread of the flames was due to the thermal covering of the building”.

“Totally Vulnerable: After fire tears through a Milan apartment building, the high-rise’s cladding is now under scrutiny”, US NFPA Journal , 30th August 2021 https://www.nfpa.org/milan