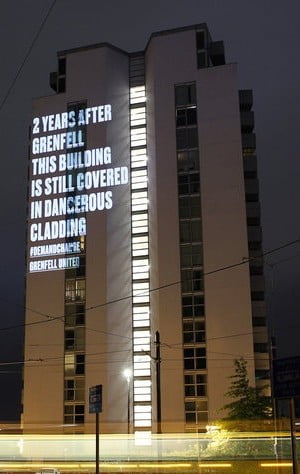 An estimated 1 700 buildings in the UK (hospitals, schools, high-rise flats …) may be “at risk” because cladding and construction materials pose fire risks. Following the Grenfell tower fire (2017) the UK Government banned combustible materials in new buildings over 18 m tall and fire tests have been carried out on samples from existing buildings with potentially dangerous cladding. To date, in tests carried out on 600 buildings, nearly half failed the material fire tests (see list). The UK Government has to date allocated UK£ 600 million to help fund replacement of dangerous cladding on existing buildings (for England only: UK£ 400 M in 2018 for publicly owned buildings, UK£ 200 M in May 2019 to help private building owners). This compares to the budget of the Grenfell Tower renovation in which flammable cladding was installed (around UK£ 12 M) and the amount already spent today supporting the victims of the fire (over UK£ 130 M)
Independently, UK figures are being published across the UK showing that many public buildings failed to meet fire safety standards in checks carried out by fire services over the last year (1/3 “unsatisfactory” in Norfolk up to nearly 3/4 in Hampshire). Buildings failing standards include hospitals, schools, hotels, shops, offices and factories, with failings including inadequate fire alarm testing, insufficient fire risk assessment or emergency exits not kept clear.
Two years after the Grenfell fire tragedy (14th June 2017) housing campaigners consider that not enough has been done and that thousands of people are still living in buildings that are not fire safe. ‘Grenfell United‘ (a group of survivors and victims’ relatives) organised a national campaign lighting messages across tower blocks in London, Salford (Manchester), Newcastle which are still covered in flammable cladding or without sprinklers or fire doors.