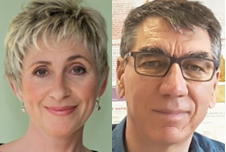 Sandrine Therias, Institut de Chimie de Clermont Ferrand France, reviewed literature on weathering of PIN flame retarded polymers. In some cases, changes in fire performance after weathering result from deterioration of the polymer, not of the flame retardant. Certain PIN FRs show specific weathering challenges, e.g. ammonium polyphosphate can degrade to carbonylated compounds, iron impurities in organo-clays can act as a photo-activator. These challenges can be addressed by use of specific stabilisers, depending on different polymers. Halogenated FRs can release halogen acids, leading to photochemical deterioration of polymers, and it is difficult to identify appropriate acid scavengers to address this.

Laurent Ferry, Mines Alès France, reviewed further information on weathering of PIN flame retardant polymers. Weathering can cause hydrolysis of the polymer, leading to dripping in fire, but also to a loss of some PIN FRs. Water uptake in weathering can increase time to ignition. Humid weathering tests were carried out using epoxy – flax fibre composites with 2% phosphorus in PIN flame retardant, either AlPi (aluminium diethyl phosphinate) or DOPO applied to the fibre by vacuum infusion. AlPi did not lead to increased water uptake during weathering, whereas DOPO did so, with water uptake into the fibres. The fire performance was not significantly modified by the humid ageing with AlPi, whereas some decrease in heat release was noted with DOPO (probably related to water release).